Relationship Abuse and PTSD: How to Heal from Trauma

Most people think of post-traumatic stress disorder (PTSD) as a condition that is only suffered by military veterans or people who have experienced a horrific event. However, relationship abuse can also cause PTSD in its victims. 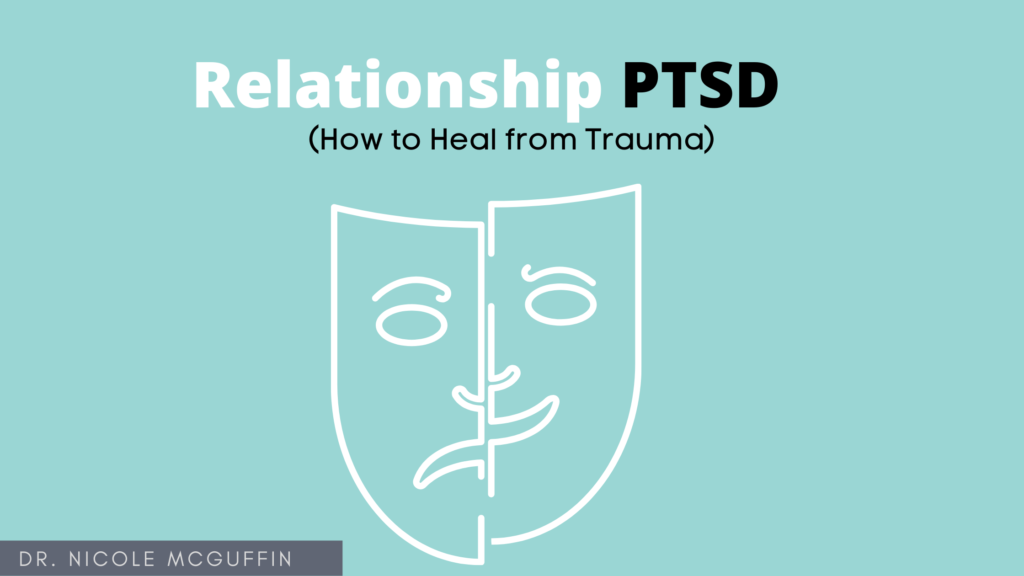 If you are a survivor of relationship abuse, then you know how traumatic it can be. The emotional pain caused by abuse can be overwhelming and leave lasting scars. Survivors may struggle with relationship PTSD symptoms long after the relationship has ended. If you are struggling to heal from the trauma of a relationship, don’t worry, you are not alone.

What is Relationship PTSD (R-PTSD)?

Yes, it’s real. Relationship PTSD (R-PTSD) fits under the conceptual framework of complex trauma. R-PTSD is a disorder that may develop following abusive behavior that happens in intimate partner relationships.

It might be caused by emotional, psychological, physical, or sexual abuse, which can take away your sense of security, self-esteem, and self-assurance. However, in addition to intimate partner relationships, R-PTSD can also result from abuse in childhood also.

When suffering from R-PTSD, other might notice that you seem “jumpy” or “hyper-vigilant.” You may startle easily, have a hard time sleeping, and suffer from anxiety or depression.

It can be hard to trust other people, and you may find yourself feeling isolated and alone. Survivors of relationship abuse often suffer in silence because they feel ashamed, embarrassed, or scared.

Some common signs and symptoms of R-PTSD include:

What is the difference between PTSD and Relationship PTSD?

PTSD and R-PTSD are very similar conditions, but there are a few key differences. As a general rule, PTSD is more likely to occur following a single, traumatic event. R-PTSD, on the other hand, is more likely to develop following chronic or repeated exposure to trauma. 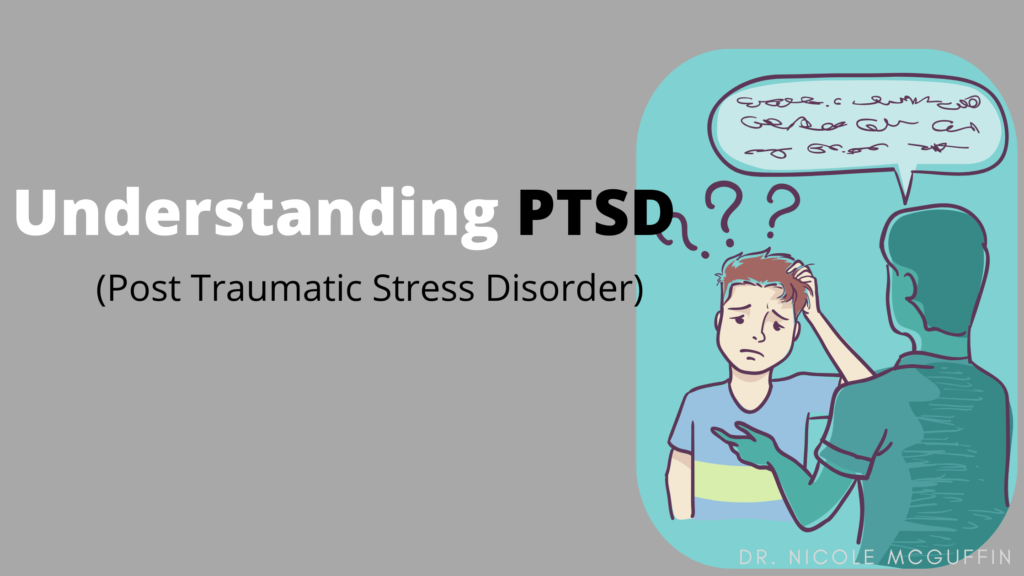 PTSD is defined as the development of distinguishing symptoms after an exposure to trauma. PTSD is an anxiety disorder that develops in up to one-third of individuals exposed to traumatic events.

It’s common to re-experience the traumatic event with recollections that are involuntary, and intrusive. Nightmares, dissociation, flashbacks, and intense psychological distress may be present.

Some of the consequences of a traumatic incident might include: negative emotions, blaming oneself for what happened, and self-blame. Fear of reminders, guilt over one’s actions during the trauma or thinking about it, anger toward others who have done nothing to prevent it, extreme grief following a loved one’s death or severe injury can also happen.

PTSD is shock trauma resulting from being overwhelmed with the capacity to cope with the threat. There is a threat to safety. Fear disrupts the ability to regulate keeping you stuck in a flight, flight, or freeze pattern. Fear activates emotions, including panic and dread. Fear leads to hyperarousal, re-experiencing, and avoidance/numbing as a result of these emotions.

Relationship PTSD (R-PTSD) is similar to PTSD in that it includes a sense of threat, avoidance, and re-experiencing. In addition, it includes symptoms of interpersonal disturbances, a negative self-concept, and affect dysregulation.

R-PTSD is a chronic experience over time impacting both psychology and physiology. If you are in a relationship and you are being dismissed, invalidated, or denied your feelings of reality, over time, chronically, you may be at risk for R-PTSD. 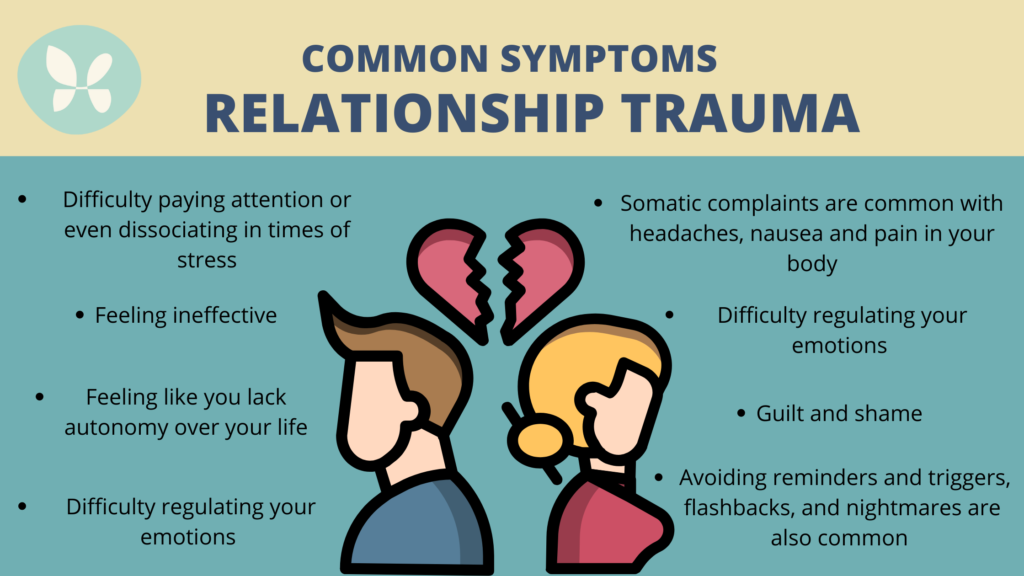 Internally, R-PTSD feels like it is difficult to connect to ourselves and others. It may be difficult to be present, feel joy, and like you are in collapse in your body. It can feel hard to relax, settle, and have internal quiet.

Relationship Post-Traumatic Stress Disorder can manifest in a variety of ways. The following are some common signs:

Can you get PTSD from a toxic relationship?

Yes. You can get PTSD from a toxic relationship.

Stephen Porges’ Polyvagal Theory shows us how the vagus nerve impacts emotion regulation, social connection and fear responses. You can think of your vagal nerve as a ladder with the ventral vagal complex at the top. When you are in ventral vagal, you have access to your social engagement system, all is well in the world, and you feel grounded and connected to yourself and others. In the face of threat, you may drop on that ladder to the sympathetic vagal complex of fight and flight or when you don’t have hope you may drop lower to the dorsal vagal complex of freezing, shutting down, collapsing and disconnecting.

This theory shows us how significant attachment relationships are. When there is a loss of safety and security your experience of yourself and the world changes to one of protection. Your social engagement system goes offline. Your whole system gears up to fight or run, or shut down to keep you safe. Over time, this chronic threat to safety experienced in your autonomic nervous system can result in relationship PTSD.

Relationship events that can trigger PTSD include;

Having your emotional, physical or sexual boundaries chronically violated can create deep mistrust. If there is a history of trauma you will be more susceptible

Can PTSD go away on its own?

No. Trauma generally does not go away on its own, but it is possible in some circumstances. More often than not, if not treated, symptoms can last for years. If you are a survivor of relationship PTSD and are struggling with symptoms, it is important to seek help from a mental health professional that specializes in relationship trauma. Remember, you are not alone and there is help available for you.

PTRS is a newer term that has been proposed to describe the experience of trauma in a close intimate relationship. The concept does include the over-arousal and intrusive symptoms of PTSD. It does however take away the avoidance symptoms required for a PTSD diagnosis.

PTRS comes from the fear, mistrust, and trauma that can happen in a romantic relationship. It is defined as an anxiety disorder resulting from physical, emotional, or psychological abuse in a romantic relationship. This proposed classification is lesser in the severity of PTSD. There is no dissociation, threat of loss of life, or changes in identity.

Trauma can affect people differently. The impact can be subtle, insidious, or even outright destructive according to the National Institute of Health. Emotional reactivity can be a traumatic stress reaction to relationship abuse.

If you have experienced relationship trauma and as a result have lost hope, experienced confusion, sadness, anxiety, agitation, numbness, dissociation, confusion, or blunted affect having an emotional reaction is a normal response to an abnormal experience.

Strong feelings, feeling out of control, emotional dysregulation, are totally normal reactions. Traumatic stress causes a feeling of overwhelm or a deficit in emotion (numbing). If you find yourself emotionally overreacting you may be having reactions to extreme stress.

Can you get PTSD from a breakup?

Losing a relationship from divorce or separation can be one of the most stressful experiences one can go through. A breakup or divorce, as stressful as it is, traditionally would not be enough to qualify as PTSD according to some researchers, without specific markers. Breakups can however easily qualify for post-dissolution post-traumatic stress symptoms and fits more closely to the definition of complex trauma with injury to the SELF.

However, the situation is more complicated than that.

If there is a past history of any developmental trauma or betrayal in the relationship, a break up can trigger past unresolved loss or previous trauma that has not been resolved.

If your relationship had abuse, exposure to threat, domestic violence, or chronic psychological abuse you may have relationship trauma. A breakup can feel more traumatic when there is a history of past trauma making you more vulnerable. This will create a risk for relationship PTSD.

Relationship trauma is all about heartbreak. How you come back to yourself and others is part of the healing process. Connection in relationships are a biological imperative. Reconnecting with yourself matters.

5 ways to heal from a past traumatic relationship

1. Seek support to process your feelings and reactions

2. Work with a therapist to create safety in connecting to yourself, developing more agency and how to co-create healthier relationships in the future.

3. Work with a therapist to practice presence, creating emotional safety, connecting to yourself, manage emotional dysregulation and fear, learning to trust yourself, your self perception and developing agency to create the life and relationships you would like.

4. Identify and challenge any thoughts or beliefs that are keeping you stuck in the past or re-victimizing yourself.

5. Connect with healthy people who support your healing process and can be a positive force in your life.

Healing from a traumatic relationship takes time, patience, and courage. There is no right or wrong way to do it. Remember you are not alone in this process.

After a toxic relationship it can be hard to love and trust a new partner. Working with a therapist that specializes in Psychobiological Approach to Couple Therapy (PACT) can help you identify patterns and create secure functioning in your next relationship.

Dr. Nicole McGuffin specializes in relationships and trauma.  She is accomplished in neurofeedback and therapy with more than 15 years of expertise in psychology, neurophysiology, and psychobiology. Dr. McGuffin empowers people to create real healing and transformation.